I went through my medical files a while back and I came across my old statement from my first surgery repair in 2007. It was interesting to see the differences in cost from my first quadriceps rupture to the bilateral rupture I incurred years later. As you can see from the image below, the first time I had a ‘suture tendon’ repair done it costed $1,572. Now mind you, this was only the cost to repair my tendon. Additionally there were bills for the anesthesiologist, the hospital, and physical therapist.

Having had no insurance during my first injury was costly indeed. I was unemployed at the time and without any medical coverage so I started to stress on the bills that had come my way soon after my surgery. I was advised however, that being in the position I was in I could write a hardship letter to get my medical costs greatly reduced. To my surprise it worked very well.


Fast forward to 2013 and my surgery costs are almost $4,000 dollars more since I ruptured both quads, even though the right leg was only a partial tear. I’m just thankful I had some good insurance to cover most of the surgery fee. However, since my insurance deductible wasn’t met, I was responsible for around $1,500 for the difference. The anesthesia charge was $1,200 and was reduced to $192 with insurance adjustments. The hospital stay was close to the same cost as my previous stay in 2007 which I found odd. I’m still in shock on how a short stay of less than half the day can run over seven grand. Thankfully the bulk of that fee was covered again by my insurance. I am curious to know what other quadders were charged for their surgery? Drop me a line and let me know. 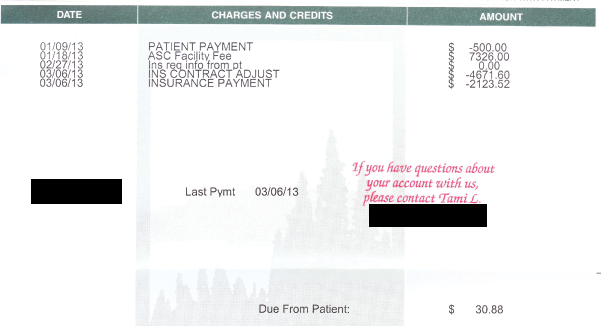